The Journey is the Joy

Get our Top 5 Suggestions

Connect with the local charter specialists for your sailing vacation in Greece.

Enjoy uncompromising privacy on board with unique sailing experiences recommended by local experts.

Experience the wonder of an exceptional sailing itinerary around the Greek islands crafted just for you.

Daiquiri is a 67.00 ft long lagoon catamaran, built in 2022 and home-ported in Greece. She offers a luxurious, contemporary interior design and excellent amenities for up to 10 guests.It is a privately owned and professionally crewed luxury yacht that affords you the opportunity to relax under the care of your staff and captain and enjoy the best of what the Greek islands have to offer.

ONEIDA yacht is a 52.0 ft long sailboat catamaran, It was built by Lagoon in 2020. The yacht layout features 5 cabins and accommodates 10 guests. The cabin arrangement is following: 5 VIP cabins, all with private facilities and fully air-conditioned

VALIUM 55 is a luxurious 55ft catamaran built by Lagoon. A model created by passionate designers for sea lovers searching for freedom. S/Y Valium 55 features 5 cabins and accommodates 10 guests. A vessel with nothing left to chance, Lagoon has designed it in all its smallest details. You can enjoy a gentle lifestyle on board the VALIUM 55, far from the constraints of daily life.

Adriatic Dragon comprises all the features of a 5-star vessel and so much more. Her main distinguishing feature is the master suite, independent of the rest of the vessel with the magnificent balcony unique for a sailing vessel and allowing sea breezes, scintillating views and access to the water.

Lagoon 620 with five queen size bed en-suite cabins design is very accommodating. The complete interior layout is elegantly incorporating wood finish, upholstery, inner liners, and more. A functional flybridge can also accommodate guests thanks to separate crew and reception areas. Saloon and cockpit are beautifully integrated and include “wet bar”, areas for lazing around and the option of taking delicious meals inside or out without having to make any adjustments.

Elegant and entirely contemporary, this large cruising catamaran represents the excellence of the Fountaine Pajot yard. The Fountain Pajot 67, with its considerable size and spaciousness, includes a magnificent flybridge. Easily accessed from both sides of the cockpit, this area is inviting while blending perfectly into the elegant lines of this boat.

The Sunreef 80 is an all-around sailing leisure yacht ideal for exclusive getaways, charter and transoceanic adventures. This model boasts a combination of exterior and interior areas easily flowing into one another. A clever bridge deck and superstructure design allow for a superior level of comfort onboard whereas the generous teak use, high bulwarks and classy lines underscore her modern style with a classic edge.

The Lagoon 52 F, the latest model developed by the world's leading builder of cruising catamarans, marks a whole new era in the design of such boats, as indeed did its predecessor, the famed Lagoon 500. With its diamond-shaped vertical bows, bevelled hulls, its as if levitated deckhouse and tall rig, the Lagoon 52 F is no ordinary catamaran, but its originality goes a great deal further than just its "outer" appearance, or even its interior layout.

The BALI 4.8 Open Space brings together the best of the original characteristics that make up the DNA of BALI catamarans. In addition to the recognized innovations such as the rigid forward cockpit with lounge area and sunbathing area; the new platform linking the two sugarscoops with large bench seat and lockers; the large tilt and-turn door and sliding windows; and a panoramic relaxation area on the coachroof, the BALI 4.8 offers, as does the 5.4, new access to the forward cockpit by an interior door and cabins by panels opening onto the aft cockpit, and a 6 cabin / 6 bathroom version unheard of on a 48 footer.

The Fountain Pajot 47's sleek lines deliver top performance under sail and some clever features ensure the living areas provide comfort both under sail and at anchor. The raised steering station flows directly as a extension of the cockpit for ease of movement and excellent visibility. You can enjoy comfortable seating for three guests to share in the sailing experience and the panoramic view from above, ideal for spotting dolphins and whales. The upper deck is easy to traverse and the boom is accessible with no obstacles. The superbly designed lounge deck complements the boat's streamlined style and is a beautiful haven for relaxing and enjoying the view. Indoor/outdoor living is integrated, the Fountain Pajot 47's galley opening onto the protected cockpit which is seamlessly connected to the lounge deck on one convenient level. Furnishings include a large table and bench seating for 8-10 people, a sumptuous lounge suite for relaxation, and outdoor fridge available as an optional extra.

For bareboat or skippered week charter in Greece. Lagoon 450,  is perfect for a family or a large group of friends, but is still small enough to sail and maintain without a professional captain. Also, is larger and with a bigger sail area than Lagoon 440, this Lagoon 450  has 4 cabins and 2 heads. In addition, it benefits from important improvements in terms of safety, performance and comfort.

This exciting new 40-foot catamaran sailboat has been exclusively designed to deliver a simply superb experience at sea and while moored. Remarkable volumes and light-filled living spaces allow you to comfortably share the experiences and create life-long memories with family and friends.

The Lagoon 51 reveals an optimized circulation on board and a great fluidity. A new model with an amazing layout and offering sustainable solutions.

The most successful catamaran in her class. The integral deck, efficient for sailing, allows you to move smooth around the various spaces, from the aft platform with bench seat to the forward cockpit with lounge and sunbathing area. The full-comfort flybridge is home to an immense and safe relaxation area as well as the helm station designed for single-handed or short-handed use… not to mention the performance and quality that make the Catana group’s range so successful.

Evolution of the revolutionary BALI 4.0, the BALI 4.1 innovates once again. The BALI 4.1 is the first sailing catamaran, totally bridged from its bows to its backboards, offering a fully open and ergonomic living space. It also offers a large front cockpit with sunbeds, a relaxation area on the breathtaking roof, a platform connecting the two rear skirts with a large bench and a general comfort worthy of a large catamaran.

The BALI 4.6 is recognizable at first glance thanks to the new design of her hulls with fine bows and her new very elegant lines The BALI 4.6 benefits from all the innovations signed by CatanaGroup which are the DNA of the BALI

The highly anticipated 46 is a new generation Lagoon catamaran, representative of the new Lagoon DNA. This high-performance and seaworthy boat is designed for user-friendly, enjoyable sailing with its elegant lines, unrivaled brightness and the generous, interconnected spaces.

Are you ready for the trip? 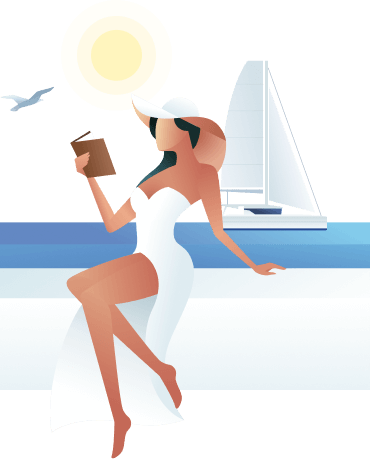 We have traveled on business and pleasure to over 40 countries around the world for many years. After this wonderful experience, I can say with very high sincerity that the Luxury Catamarans team clearly set the new standard for us in executive white glove service.

The staff at luxury catamarans is excellent, so attentive, the phone is always answered by a staff member who is willing to help and answer any questions you might have. Luxury catamarans was able to find the catamaran we were looking for which all the other companies were not able to find. We are already planning our trip for next year and without question we will use the services of luxury catamarans

Stelios and the team at Luxury Catamarans provide a first rate service. Excellent customer care and contacts across the world for the best yachts at the best prices. No hesitation in recommending Luxury Catamarans for booking your dream sailing holiday

Trip of a lifetime that exceeded all of our expectations.
In a challenging environment with Covid restrictions still present we enjoyed a truly relaxing and enjoyable vacation.
Everything from beginning to end was as advertised and no issues whatsoever.
Big thanks to Stelios for helping with the arrangements, to Nargia for the processing and more importantly to Captain Andreas & Katerina, our lovely hostess who went over and beyond on anything we needed and wanted.

This was the second time that we have used luxury Catamarans, we are in the process of booking through them again next year. Their service is excellent and the booking process and communication went along without any complications. I would certainly recommend them.

Highly recommended!! Excellent service and super responsive from beginning to end of the trip. Amazing experience overall. Would definitely repeat booking with them

Undoubtedly the best experience my family and I had !
The service from the whole team Stelios Chris and Penelope was exceptional from the first moment to the latest.
The vessel,the crew, the itinerary were all great and according to our preferences. Definitely going to be back for another unique experience.

We had an incredible experience sailing through the Ionian Islands using the services of Luxury Catamarans. This was our 3rd time chartering a catamaran out of Lefkas and the service experience was the best so far. We enjoyed a brand new Bali 41 which was in immaculate condition, the pre-departure briefing was very informative and the hand-over at the end of the charter without fuss or problems. Only wish we could have had more time to enjoy these islands again, but we will be back Luxury Catamarans.